Every morning before the kids arrive the volunteers and staff gather around to talk about the previous day and the plan for the ones ahead. We discuss what went well, what could have been better, what we are doing differently for the day, and what we need moving forward. Yesterday, we met for our final meeting. No children were on their way, and no plans were discussed. It was volunteer appreciation day, and everybody arrived at the foundation for brunch and a slide show to wrap up the amazing summer that we had. It was very different than our usual meetings, and it was much more moving than I had expected.

Throughout the program, we discussed the successes of the children. We took pictures of their smiling faces and laughed along with them when funny things occurred. As we moved through the days one at a time, our focus was on the kids. I did not realize until the end of the program how much I had gained throughout the summer program. I only knew a few of the volunteers and staff at the Foundation when I first started this summer. In six short weeks we had all become a team and working together was a true pleasure. After the slide show was over, I was amazed and touched by the conversations that took place. Certificates of appreciation were given out, and with each certificate came comments and praise not only from the staff, but from the other volunteers as well. It was clear that everyone was proud to have been apart of the program. The chatting and reminiscing continued, and it was as if nobody wanted to leave the center. The past six weeks we had worked so hard to help the kids and as we sat together eating grapes and zucchini bread, it was very apparent that we had also been helping each other. 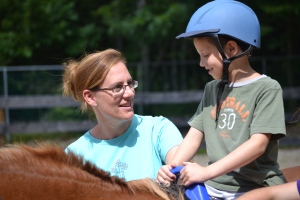 Every day when we left the center, it was with smiles on our faces. No matter what challenges we faced throughout the morning, they were strongly outweighed by the laughs and successes of the day. If it rained, we played. If someone fell down, they jumped back up. In the riding ring tears filled the eyes of the volunteers as children’s faces lit up from atop the horse, as if they were on top of the world. Having the privilege to work and volunteer at the Laura Foundation was an incredible experience that was obvious in the glowing smiles and stories of everyone talking about it. As one of the volunteers said as we avoided leaving the center for the final time of the summer, “It isn’t something that makes sense unless you experience it. You see the looks in the kids’ eyes and the smiles on their faces and you get goose bumps. It just makes your day.“ We see their worries and struggles melt away as they glide around the ring, paint with their favorite colors, or bowl a strike for the first time, and ours melt away with them.